skip to main | skip to sidebar

A game of two halves 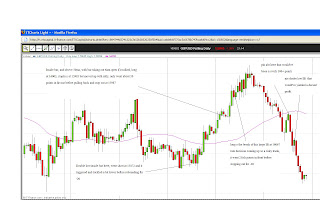 Well glad this week is over, although i started my weekend a bit too early (bank holiday on Friday here).

Wednesdays trade was a short in the afternoon, a gap down and then a double low/ Inside bar, with lows at 15875, went short at 15872 and it chopped about before moving a little lower, but not enough to warrant moving up the stop, before rallying through the stop at 15992.

Thursday carried on where Wednesday left off. Long of the 5am IB at 16003, stop at 83. It rallied bya bout 20 point sbu not the 30 in the rules before coming back to hit the sop which had been moved up as the bar low was slightly higher. stopped at 15987 for a 16pip loss.

It was BOE rate day so cable could be very volatile but there was a large IB at 9am so i took the break of this, as the last time i missed a trade it would have profited. Long at 16067, stop at 16047 Cable kep bouncing before pulling back and then as the BOE was announced it rallied to 16090 but not the 30 to move the stop up, before the imevitable pullback to stop for another -20.

Not really the week i was hoping for and with Friday being a Bank Holiday where i live i was almost in weekend mode. There was an Ib early of Friday but was above the 50ma so i could not short it. After this I decided to call it a week........and so as you'd expect there was a pin bar then a few hours later and IB, which would at present be yeilding 100+ and 25+ pips each. Just shoes you've got to "be in it to win it" etc.

As usual , human psychology at it's best, the light was at the end of the tunnel, and if i'd tken those Friday trades and that trade on Tuesday the account would have been at new equity highs of around £180 rather than £117.50.

On to next week, with the account at least still in profit if only a little. Maybe it would be better to move the stop to Breakeven quicker as here were a few trades that went 20+ before stopping out, or maybe not use the filter of the 50ma as that meant i missed an IB on Friday morning? Who knows, but one bad week is not the time to start changing the system, especially when most of the problems were me missing the rofitable trades rather than the losses. Food for thought. 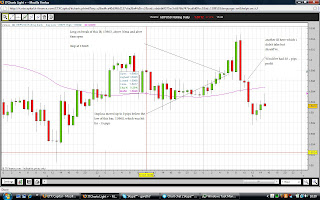 There was another IB 10am bar, wiith the high of 15971, 4 point below the 6am open i could've gone long on any breakout here as this would have gone above open on entry, but the low of the IB was also just about touching the 50ma so going short would have also fitted the critieria for a trade. i chose to do nothing and cable proceeded to fall below 159 before bouncing back up for what would have been a 20 odd pip profit.

On to the next trade and i must take this one!!! 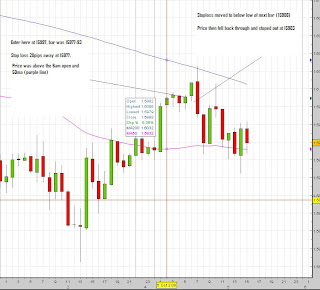 Sort of an inside bar this morning, on some data feeds it was inside the prvious, on ETX it was 1 pip higher, but i decided to trade it anyway. The bar was a small Ib 15977-93. With the entry price being above the 6am open and the 50moving average.

Tomorrow's another day and hopefully a profitable one.

A week of choppiness for cable and I didn't trade today, maybe i should have, another NFP day may deliver a 300 point move but today would have been another loss chalked up.

Hopefully next week will bring us some profits.

Have a good weekend
Posted by SIMPLE DIBS at 8:40 PM No comments:

After a few day with not much decent price action Cable has put in a double high/pin bar with a high of 15991.

I entered an order to buy at 15994, with a 20 point stop, which has been triggered and the trade has now moved 30points in our favour so the stoploss is now at breakeven.


*I have amended the rules slightly so that once a trade is now 30 instead of 40 points in profit i will move stop to breakeven, this is because it seems that if the trade has gone this much in our favour a pullback to entry will more likely signal a failed breakout so we are better out and waiting for a better opportunity that giving away money, although we may miss a few moves his way it should reuce the losses and make the account growth smoother.

The trade ran back and stopped us out at breakeven...better than a loss. It then carried on falling and would've hit the original stop anyway.

I may not trade tomorrow morning as i think it may be Non-farm payrolls in the US so may just be choppy all morning, but we'll see

Cable had sharp move down overnight and so there was more of a chance of a pullback in the London session but still we must take the trades.

There was a pin bar formed by the 6am candle with a low of 15793 (mid price) so i had an order loaded to sell at 15790, it went wthin 1 point of this before shooting back up into the 158's and never really looking back. A lucky miss indeed. There were a few more IB's but as they were above the open but below the 50ma we couldn't take the trades.

Tomorrow is another day.

A nice quick loss in cable today. Less than 10 minutes in the trade!

On to the next trade.

SIMPLE DIBS
This is meant to be a simple demonstration of a simple trading system returning profit over long term.