skip to main | skip to sidebar

Posted by SIMPLE DIBS at 4:39 PM No comments:

Riding the waves over the atlantic

Another day another dollar....or two move!

Will this be the first?

Unable to move my stop any further as the previous bar did not make a lower low so our stop remains at 15802 for the night, hopefully markets will drift lower. For now i'll run with the 50% rule but if i find too many profits being given back then i will look to change this somehow.

Day 3 and still no trades, this was turning into a lesson on patience and discipline not actual trades but i've chosen a setup that should over time produce good Risk:Reward when the correct trades are taken, this means only the right trades, not ones that are sort of Ib's but i've got a hunch etc


We did finally get a trade after the midday candle:

Our order was triggered at 1320 and we went long 2.85 gbpusd at 15819, the market then chopped about before the figures came upon which it gapped down, then up then down again. Since our opening candle made new highs i moved the original stop to 50% of the difference between the original stop 15714 and the low of the 1300 candle 15762 (714 -762 = 48 /2 =24) so the new stop was 15738. This is to reduce risk becasue the market may go back to near the low of this candle so we don't want to get stopped out by a quick flick down, but if it goes much beyond this low then the rally's probably over and we want to be out and wait for the next IB.

If i had left the stop at the original point then we would still have been stopped out in the end.

I believe the best profits will come from the trades that go on with little pull back, our job is to manage the ones where it chops around and try to minimise loss.

There's a lot of maybe's with stops, only time will tell if my 50% method is right so thankfully we're demoing this.

Have a good weekend and hopefully we'll all 'ave it off next week.
Posted by SIMPLE DIBS at 1:07 PM No comments:

I am trying to follow this method properly so we need to only trade real Inside Bars. On Thursday morning my charts with Ig showed that the 6am bar had only traded 2 pips above the 5am bar, so although it was not strictly an Inside Bar i would've been tempted to take a break of it as this is usually when the market comes to life so there could have been a decent trade.

So i let this trade go and although it did go up to start with it would have only produced only a break even trade at best using the 50% stop.
Posted by SIMPLE DIBS at 12:56 PM No comments:

So near and yet so far 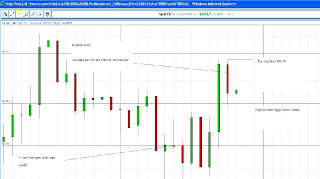 On this note i'm not sure if IGmarkets accept odd shapes but we will see......

In the next hour the price fell below our stop and never rallied up to our target price so i cancelled the order.

Inevitably in the following hour the price rocketed through our level and onto the high 161's but such is life. We are looking for low risk entries so would ideally like the price to break above our IB in the first hour without going anywhere near our stop.

Still there will be other days and i'm sure the market will reward our patience.
Posted by SIMPLE DIBS at 5:05 PM No comments:

This system is discuss on Forex Factory (www.forexfactory.com) as the DIBS system (Daily Inside Bars)

What we will do is look for Inside Bars forming on the 1Hour chart of the GBPUSD.

I will only trade in the direction of the day, which shall be decide by the open of the 6am (UK time) candle. If the price is above this we will go long on the break of an Inside Bar, if price is below we will go short.

If an inside bar forms i will place a Buy/Sell stop loss order 4 pips from the High/Low of this bar and my stop loss will be 4 pips above/below the other end.

When an hourly bar makes a new high/low i will move my stop loss to 50% difference between the high/low of this bar and my previous stop.

I will only trade london hours 7am to 3pm, after this the stop will be left until the next morning.

I will only exit if my stop is hit or i get a reversal signal.

I may miss some signals as i have other trades to make, but will attempt to trade all the signals i see.

I will only need to check the trade once every hour, just before the hour.
Posted by SIMPLE DIBS at 9:37 AM No comments:

Everyone says trading must be complicated and lots of people advocate using Moving averages adn many other indicators. The purpose of this blog is to show a simple method using only price action will make money over time.

Not all trades will make a profit but the winners should make more than the losers so we should profit overall.

At the moment i will just be trading a demo account with IGMARKETS.

If you attempt this please follow tight money mangement rules, this is what will make us money.

SIMPLE DIBS
This is meant to be a simple demonstration of a simple trading system returning profit over long term.